What makes us accept certain computer systems, but dislike others? Christina Keller, a new professor of Informatics at Lund University School of Economics and Management, has conducted long-term research on the factors that make us accept information systems. 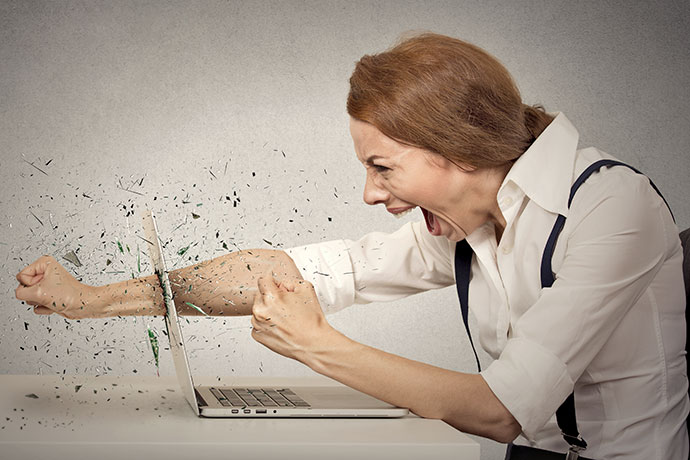 What is it about certain programmes on the computer at work that make us frustrated, whereas apps on our phones make us, if not happy, at least contentedly diverted? How can certain systems be a joy to use, while others mostly seem to waste valuable working hours, rather than save time?

“According to research, there are two principal factors that make us positively disposed towards a system. The first is that you can see the direct benefit of the system. The second is that it’s easy to use,” says Christina Keller.

She recently took up the position of professor of Informatics at the School of Economics and Management at Lund University and has many years of experience in research on acceptance of systems, mainly within e-health and e-learning.

“There is also a clear pattern in that perhaps you use Facebook or WhatsApp because other people do. If other people say that a system is good, you are more inclined to think that it’s good.”

The PC revolution sparked her interest

Christina Keller became interested in information systems as an academic discipline in the mid-1990s. At that time, she had worked extensively within administration in a county council and saw the introduction of computers as an instrument.

“The PC revolution arrived at my administrative job at the county council around 1994–95. Some of us thought that IT was fun, including me. But, there were also those who thought it was difficult and problematic and so, informally, we others helped and supported them.”

This interest resulted in her building on her bachelor’s degree in psychology with a master’s degree (60 credits) in informatics and later a PhD in financial information systems.

“My background in psychology is what makes me interested in information systems. I saw as early as the 1990s that the new technology aroused a lot of feelings and reactions. The interplay between people and technology is extremely interesting.”

Christina Keller says that it should be enjoyable to use technology and that today – when systems are also there in our leisure time, not just at work – there are more positive things associated with using technology than before.

However, there are also so many systems that the user experiences as unnecessarily complicated or user-unfriendly. Why is this still the case?
“I don’t really know,” says Christina Keller after thinking for a long while, and continues:

“One thing concerning work is that there is no voluntary aspect. Take, for example, a financial system at a large company, where everyone has to work in the same system. There are so many factors beyond the individual and their free will.”

Too narrow and generic systems

Christina Keller also mentions that systems are sometimes built for areas of application that are too narrow, so they don’t fulfil actual needs.

“Systems are often constructed for a generic task. It can then transpire that this doesn’t completely correspond with the organisation’s needs or how an individual uses the system. There are many examples where there is one system for each task, which means that you need to have several systems open and in use at the same time, which of course becomes very taxing for the person using them.”

However, information systems today are often designed with people, the organisation and operations in mind.

“We should remember that it has got better since the 1990s. But, we still have the problem that someone else is going to put a system in front of you that you are expected to use. Both then and now, it’s often a case of working around the system, rather than with the system,” concludes Christina Keller.

Information systems is a bridge between technology and human activities. These systems are everywhere and are used by many every day in all modern society. Information systems help businesses to digitalise important internal parts and functions, as well as the digital transformation of the public sector with mobile and e-health systems.

More about our research

Christina Keller's research is about the acceptance of information systems by individuals and organisations in various activities, such as higher education and health care. She was named professor of informatics at Lund University School of Economics and Management in September 2018, began her service in January of the following year and was formally installed as professor in October 2019.

“I have mainly concentrated on getting to know the university and its structure and the researchers at my institution. We have discussed what kind of research we want to do, looked for funding and written applications. I have also taught a lot and supervised essays,” says Christina about her first year in Lund.

Christina Keller started her doctoral studies at Linköping University in 2002 and got her PhD in 2007. In 2008 she became a senior lecturer at Jönköping International Business School and was appointed associate professor in 2012 and professor in 2016.