Many of us have worked more remotely during the pandemic than we ever dreamed of doing. Informatics researcher Saonee Sarker has been studying IT-enabled collaboration and its impact on work-life balance for many years, but mainly with a focus on the IT sector. Today, she sees how that industry's digital settings has moved to encompass us all. 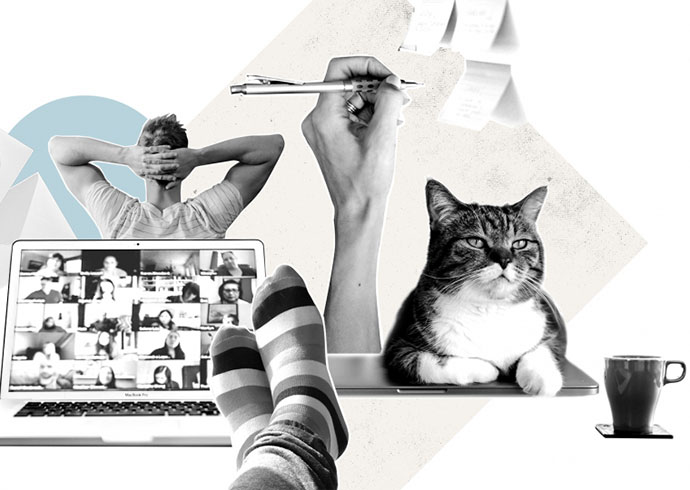 Saonee Sarker has been researching work-life balance challenges for distributed IT teams for many years. During the pandemic, she has seen how "new" homeworkers face similar challenges that the IT world has long struggled with. Collage: Catrin Jacobsson

The bookshelves in Saonee Sarker's office at the School of Economics and Management in Lund are almost empty. Perhaps indicative of our times: she took up her post as Professor of Informatics during the pandemic and, as a researcher focusing on the digitalisation of working life, she naturally reads books. But mainly digital ones.

The hybrid office as a fact of life

Saonee Sarker studies how collaboration works for virtual teams and distributed work (IT-enabled collaboration) where, for example, the IT development takes place in India, the client is in the US and the design team is in Scandinavia. The way such teams have functioned for many years has now, due to the pandemic, become commonplace for a much larger base of knowledge workers around the world.

Is the hybrid workplace here to stay?
“Yes, I think so. In the past, we could say that physical presence was the only, mandatory option for attending a conference, for example. Now we can't demand that. We've shown that digital solutions work, so why wouldn’t we continue to make use of them? It’s both more inclusive and more sustainable.”

For knowledge-intensive professions, such as academia, Saonee Sarker believes that the hybrid workplace – where we use digital tools to combine remote working with physical presence at the office – is a new fact of life. But of course, it comes with its pros and cons.

“The first year of the pandemic, I was still working as Senior Associate Dean at the McIntire School of Commerce, University of Virginia. I was constantly in meetings. That was also true before the pandemic, but then you had microbreaks when you physically moved between meetings. Now, you'd close one Zoom window, only to open yet another.”

When it comes to working life during the pandemic, both employees and managers have faced challenges. For managers, Saonee describes it this way:

“How do you keep your employees motivated while working remotely? And how do you make them feel engaged, included and part of the common platform? There have also been challenges in how to assess and evaluate people's work performance and its quality. This is usually much easier to do when you share a copresence in the same physical place.”

A solution to work-life conflict

The pandemic has also in many cases changed the nature of our working days and our relationship to work. What happens when job, leisure, and even family responsibilities are experienced under the same roof?

“The problems you face with today's pandemic-related remote jobs are similar to those we have seen when studying international IT companies. There's a risk that the line between work and leisure becomes blurred when you work from home. This may be due to something as simple as the fact that you normally associate your home with things other than work. And this lack of boundaries can lead to many dysfunctional outcomes, including stress, strained relationships, health issues, poor work performance, and turnover.”

Saonee Sarker talks a lot about "work-life balance". At the same time, it's a term she was unfamiliar with, in the context of IT, before she started researching it.

“We actually did a completely different study, on 'agility' with a large global IT company. Then they came to us and said: ‘Help us find a solution to work-life conflict. We're suffering here.’ That's really what started this entire journey for me.”

Then, around 2008, she saw how companies in North America were talking about work-life balance, but without really engaging with the real issues underlying the reasons for the imbalance employees were increasingly facing. At the same time, IT workers in South Korea and China, for example, appeared to have very different conceptions about the term.

“They have their friends at work, they have their gym and pool at work. They're there until midnight and then they're back early in the morning. All they need is to be found at work, and work and private life are all intertwined. I remember a Korean consultant. In one year, he had dinner with his family 18 times or so,” she says. 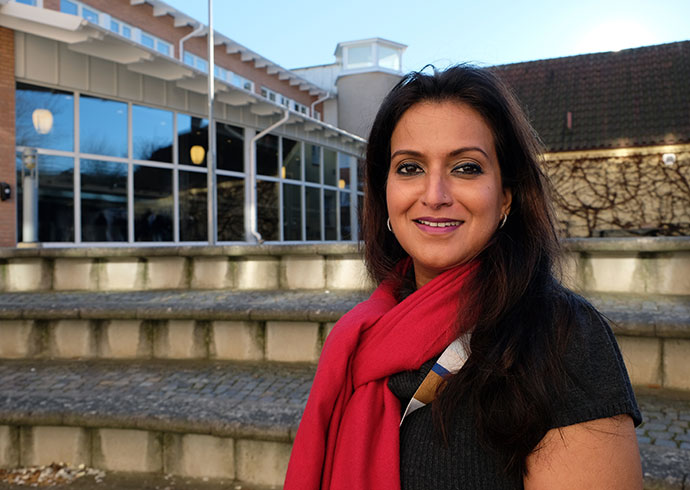 Sweden – the land of work-life balance

Today, Saonee can see how cultures have started to change. What used to be unique to Scandinavia is now being seen in other countries. Saonee describes it as different stages in “work-life balance realisation”.

“Sweden has long been seen as ‘the land of work-life balance’, not least when it comes to parental leave, pre-schools and the weekends are holy. But ten or fifteen years ago, when North America started to wake up to this, there was a lot of focus on a flexible schedule as the magic bullet. Today, the differences are reducing.”

Saonee Sarker's earlier research with IT professionals in South Korea, China, India, or the US revealed that flexibility was not necessarily considered a good thing by the employees, especially those who worked in globally distributed teams. The flexible schedule led to anxiety due to always being “on”, and a feeling of not owning one’s own time. At the same time, Saonee points out, the experience of work-life balance is very subjective.

“Your perception of work-life balance may be very different from mine. Some people live their work and are still in perfect harmony. Others need to separate the two and may suffer greatly from working from home. This is not unique to the IT world, but applies to academia as well, for example.”

Speaking of books, Saonee Sarker released a new book – both physical and digital – last year. In the final chapter of the book, “Navigating Work and Life Boundaries: Insights for Distributed Knowledge Professionals”, the authors offer thoughts on how the Covid-19 pandemic has affected, and will affect, distributed work.

“The book has been in the making a long time. The pandemic was the reason that we had time to dive deep into the work and finish it,” says Saonee Sarker and continues:

“My best friend is an IT consultant in India. She said, ‘I'll write your book, it's one sentence: ‘What do you mean, work-life balance?’’ She has colleagues who are 25–30 years old, they're ambitious, they don't have families and they practically live at work.” 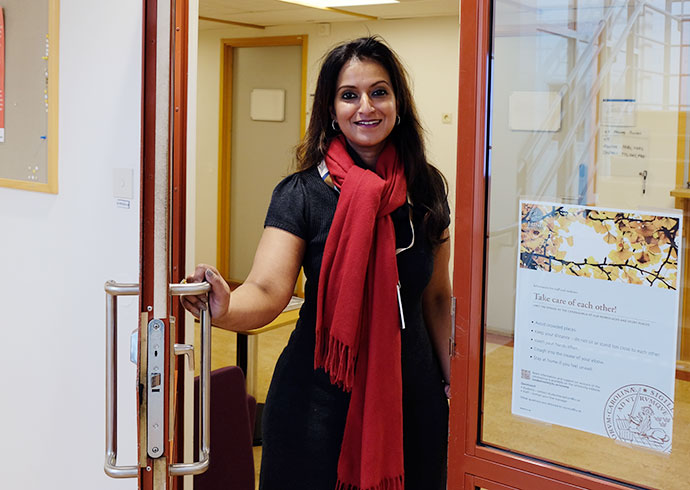 In India, it is very common for IT consultants to change jobs frequently. But around 2012, there was an unusually high turnover of people, and it wasn't just that they went to work for a competitor. No, the consultants left the industry altogether – they were so burnt out, according to Saonee Sarker.

“I know of one consultant in Korea, for example, who became a farmer. When so many people leave at the same time, that's when companies realise ‘we're losing money on this’. It was a turning point. Now, things are happening, in a positive direction, in the UK and the US, and many other countries,” says Saonee Sarker and continues:

“One example of this is that new graduates today ask at job interviews how the company works with work-life balance. Nobody would have asked that fifteen years ago.”

Technostress is stress that comes from the use of technology. Can be seen, for example, in health professionals, a field that has become increasingly technology-intensive. Saonee Sarker:

“Now, AI can be used in diagnostics, or a doctor can be assisted by a robot in surgery. But they aren’t tech people, and now they must handle this wave of technology. I have followed healthcare workers, and the amount of tech they must use ... It can really cause burnout. Some of my current research focuses on solving this: how can we bring tech into an organisation and make it empowering, not something distressing?”

Information systems/informatics is the scientific subject that develops knowledge about digitalisation and its prerequisites, significance, values and consequences in individual, organisational and societal contexts. The discipline includes studies and development of digital practices, resources, artifacts, and systems. Digital practices include management, design, implementation and use of digital resources, artifacts, and systems.

Learn more about the research in Informatics at LUSEM

This reportage was first published in the Lund University magazine, LUM, no 1 2022.

Read the full LUM at lu.se

Professor of Informatics at Lund University School of Economics and Management

Background: Born and raised in India. Moved to the US at the age of 21. Formerly a Chaired Professor and the Senior Associate Dean of the McIntire School of Commerce, University of Virginia. First came to Lund as a visiting fellow in 2012 and traded the US for Sweden in June 2021.

Three things I'm looking forward to in 2022: Preparing a major PhD seminar on AI and the digital transformation. Doing research on the tech-smart and environmentally sustainable home. Exploring a new role as Director of Diversity, Equity, and Inclusion for the journal MIS Quarterly, where I am completing my second term as Senior Editor.

Learn more in an interview on the LUSEM Staff Pages

This spring, we’ll invite you all to a lecture by Professor Saonee Sarker here on LUSEM on the topics of Work/life balance, ”technostress”, AI and hybridisation.

Learn more and register for the event here